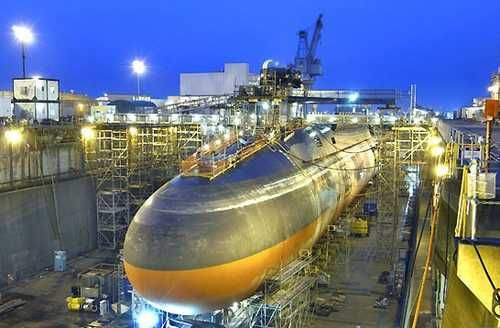 The president’s plan to delay the purchase of one Virginia-class submarine would add millions to the cost of the program and force layoffs across the country, according to those in the submarine building industry. To save money now, the proposed budget calls for building one Virginia-class submarine in 2014 instead of two, and two submarines in 2018 instead of one. But it will add an estimated $600 million to the cost later, according to the Navy’s figures, said John Holmander, Electric Boat’s vice president who manages the Virginia-class program. The USS California, the eighth Virginia-class submarine, cost $2.38 billion. Labor and parts will cost more four years later. Disrupting the schedule, and the learning curve, creates inefficiencies, which lead to higher costs, Holmander said. The work on the second submarine in 2014 represents about 2 million man hours annually for five years at EB and Newport News Shipbuilding in Virginia – enough work to keep 800 to 1,000 people busy. Those employees would most likely be laid off starting in 2014 if Congress approves the proposed plan, Holmander said. Dan DePompei, co-chairman of the Submarine Industrial Base Council, compared the delay’s impact at EB and Newport News to an earthquake. “But it’s the tsunami that affects the rest of us,” he said, referring to the more than 5,000 suppliers that provide parts and services for the Virginia-class program. “When you get down to the smaller businesses, some of which are really small businesses, it’s very difficult to rebound.” For some, a large share of their profits depends on that work, he said. EB would have placed purchase orders worth at least $150 million next year for parts for the submarine with long lead times. The Navy says it made hard decisions about its shipbuilding programs as a whole “to maintain a balanced portfolio of naval capabilities and meet the constraints imposed by today’s austere fiscal environment,” the Naval Sea Systems Command said in a statement. “The Virginia class is one of many programs that has had to adjust to meet current fiscal realities,” the statement said. U.S. Rep. Joe Courtney, D-2nd District, said “there is no logic” for the delay since it will cost so much – monetarily and strategically – in the long run. The number of attack submarines in the fleet will drop below 48, the stated number required for the missions, in the 2020s as the Cold War era attack submarines retire more quickly than they are replaced. It will hit a low of 39 in 2030. The submarines that are built today are slated to be in service for every year of the gap. Changing the Virginia-class program is a “very short-sighted way to budget,” said Courtney, who is working to restore the second submarine in the 2014 plans. Courtney, along with U.S. Reps. J. Randy Forbes, James R. Langevin and Robert J. Wittman, wrote to the chairman and ranking member of the House Appropriations Committee Thursday to ask for their “continued support for the Virginia-class submarine program and the industrial base that supports it.” “Do you really want to upset your most efficient program?” asked Bob Ross, executive director of the state’s Office of Military Affairs. “That’s the question I think is being asked by a lot of people in Washington, and it’s a good question.” DePompei said he understands that other defense manufacturers are facing the same hardships as submarine suppliers but the SIBC wants the Pentagon to make the “right cuts” to lower the budget. The council’s goal is to educate policymakers and the public about the nation’s ability to design, build and maintain submarines. “The Virginia-class program is recognized and documented as the most successful government program in decades,” he said, referring to the leaders in the Defense Department who have praised the program as a model for efficient acquisition. As the submarine suppliers lose revenue they had projected on the basis of the Navy’s original plan to buy two submarines in 2014, they may, in turn, raise the price of the submarine parts and services they are selling and reduce labor costs by laying off personnel, DePompei said. “The significance of that is these cutbacks would be felt in all 50 states because the suppliers are in all 50 states,” he added. EB avoided laying off some employees during past dips in the workload by sending people to the public shipyards to work on projects there. “We have to deal with realities,” Holmander said. “We are going to try our best, but two million hours a year missing is a lot of work and a lot of jobs.” These employees could be rehired in 2018, Holmander said, but there is no guarantee they would be available to come back. It will take time to train new people and get former employees back up to speed, he said. Holmander said he was also concerned about the interruption in the learning curve. The lessons that would have been learned on the second submarine in 2014 will now be learned on the first submarine in 2015. “Every subsequent unit will be one ship off of the learning curve,” he said. The budget does propose spending millions to develop a module with missile tubes that could boost firepower on Virginia-class submarines. But that project would not be enough to offset the work lost on the second submarine in 2014, Holmander said, and it will require engineers and designers, not employees in the trades.