Using actual New Horizons data and digital elevation models of Pluto and its largest moon Charon, mission scientists have created flyover movies that offer spectacular new perspectives of the many unusual features that were discovered and which have reshaped our views of the Pluto system – from a vantage point even closer than the spacecraft itself.

This dramatic Pluto flyover begins over the highlands to the southwest of the great expanse of nitrogen ice plain informally named Sputnik Planitia. The viewer first passes over the western margin of Sputnik, where it borders the dark, cratered terrain of Cthulhu Macula, with the blocky mountain ranges located within the plains seen on the right. The tour moves north past the rugged and fractured highlands of Voyager Terra and then turns southward over Pioneer Terra — which exhibits deep and wide pits — before concluding over the bladed terrain of Tartarus Dorsa in the far east of the encounter hemisphere. Digital mapping and rendering were performed by Paul Schenk and John Blackwell of the Lunar and Planetary Institute in Houston.

New Horizons is a space probe launched by NASA on 19 January 2006, to the dwarf planet Pluto and on an escape trajectory from the Sun. It is the first man-made spacecraft to go to Pluto. Its flight took eight years. It arrived at the Pluto–Charon system on July 14, 2015. It flew near Pluto and took photographs and measurements while it passed. At about 1 kilobit per second, it took 15 months to transmit them back to Earth. 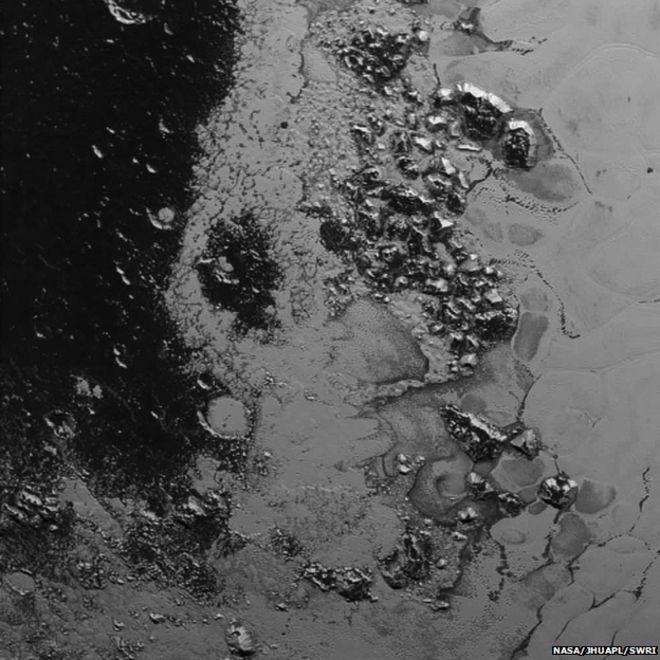 The latest images from the New Horizons spacecraft have revealed another range of ice mountains on Pluto. The frozen peaks were found on the lower-left edge of the dwarf world’s “heart” and are 1-1.5km-high. They sit between a patch of icy, flat terrain, called Sputnik Planum, which scientists believe is less than 100 million years old, and a dark area dating to billions of years ago. Jeff Moore, who leads the geology, geophysics and imaging team on New Horizons, said: “There is a pronounced difference in texture between the younger, frozen plains to the east and the dark, heavily-cratered terrain to the west. “There’s a complex interaction going on between the bright and the dark materials that we’re still trying to understand.” The newly spotted mountains are about 110km away from another range, which is now known as Norgay Montes, which appeared in some of the first images returned from last week’s fly-by. Those peaks are much more lofty: standing at about 3.3km-high, they rival the Rocky Mountains in size. 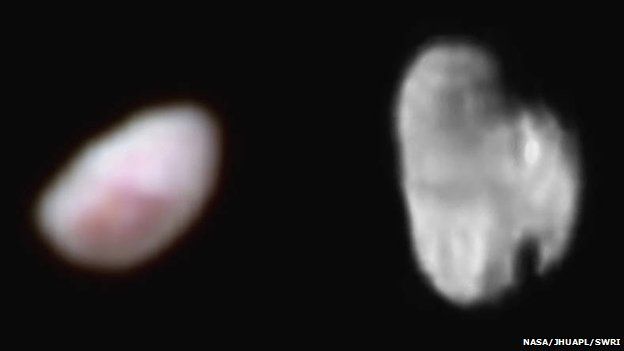 The New Horizons spacecraft has also zoomed in on two of Pluto’s five moons.

I’m finding it hard to be patient for more Nix data to be downlinkedCarly Howett, New Horizons team

An image taken by the probe’s high resolution camera, Lorri, reveals the most-detailed-view yet of Hydra, which is about 55km-long and 40km-wide. The little satellite seems to have at least two large craters, and its top half looks darker than its bottom, suggesting the make-up of its surface may be varied. Another picture snapped by the Ralph instrument reveals Nix with its colours boosted, which is a technique that helps scientists to identify details on the surface they would otherwise be unable to see. Through this, the team has identified a reddish spot, which may be a crater. “Additional compositional data has already been taken of Nix, but is not yet downlinked. It will tell us why this region is redder than its surroundings,” said mission scientist Carly Howett. “This observation is so tantalizing, I’m finding it hard to be patient for more Nix data to be downlinked.”   Keep hearing about Pluto? How much do you know about NASA’s mission that some have said is a historic first 50 years in the making? Take this quiz and find out!